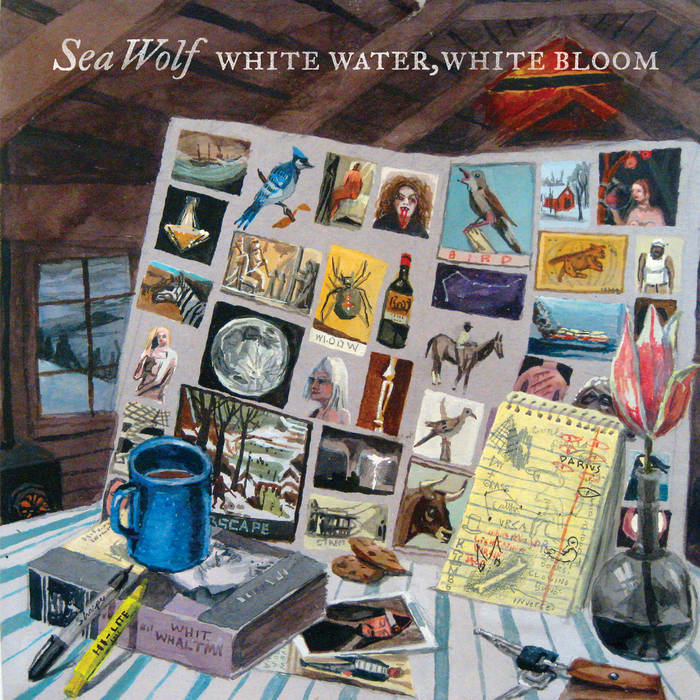 Taking its name from novelist Jack London’s 1904 seafaring adventure, Sea Wolf has evolved organically from its hermetic origins in Alex Brown Church’s living room into a muscular, full-bodied musical entity with passion to burn. After adopting the sobriquet, Church burst onto the music scene in two-fisted fashion with the EP, Get to the River Before It Runs Too Low, and the subsequent full-length debut album, Leaves in the River, about which Interview magazine observed, “His music is both erudite and unvarnished, a blend of swirling melodies, literary balladry and damaged art-rock composition.”

And now, Church’s singular vision has led to the creation of the eloquent and expansive new album White Water, White Bloom, which not only fulfills the immense promise of the initial musical diptych but conjures up its own cosmology. This is one of those rare and mysterious records wherein, the first time you hear it, you can’t shake the feeling that it’s always been part of the soundtrack of your life. You intimately know its ups and downs, its melodies and cadences, its settings and characters.
“I couldn’t have known beforehand what the next record would sound like,” says Church, “but I did know I wanted it to be bigger, with a band feel, rather than another series of intimate confessionals.”

A song cycle set against the changing of seasons, this timeless work unfolds like an epic poem, yet resonates with thematic elements that speak, elliptically yet unmistakably, to the world we live in. Pulsing with evocations of nature at its most elemental, Church’s songs are flooded with vivid imagery, carried along on torrents of sounds as majestic as a mountain stream swollen with the bracing, crystalline runoff of spring’s first warming breath. What’s more, he sings these songs with newfound power, the result of extensive roadwork behind Leaves in the River, while deepening the mesmerizing expressiveness with which he made his initial mark.

Opening track “Wicked Blood” begins with what sounds like an orchestra tuning up before surging to glorious life, the rhythm section shaping itself into a propulsive groove accented by delicate piano notes, carrying along the opening chapter of the saga: “We met in the East/ poured in like a flood,” Church begins, shadowed by the breathless wheeze of an air organ, “You’re the whispering kind/dark sapphire blood/A vision of veils/all shimmery white/like a backdrop of sails/all aglow from the light/of the wonder behind/at a starry night.” And with that, we’re off into an adventure of cinematic immediacy, as befits the sensibility of this onetime film student, who’s clearly found his natural medium of expression.
“Lyrically,” says Church, “I like to incorporate what one would construe as classic imagery, and even infuse the songs with elements of mythology, but also delve into more contemporary themes. I’m interested in the way words look and feel, not just when you hear them but also when you read them.”

Church’s verbal acuity is mated with bold, vibrant soundscapes set off with thundering drums, stabbing, reverb-soaked electric guitars and ghostly keyboards, resulting in such memorable pieces as the mythological tale “Orion & Dog,” ornamented with strings right out of a John Ford western; the folk-noir fable “O Maria!”; the surging title song, burning with Byronic heat; the fever-dreamscape “Spirit”; the muted, idyllic, “The Orchard”; the Dylanesque roundelay “The Traitor”; and the closing “Winter’s Heir,” with its life-embracing denouement.
“When I write a song,” says Church, “for me it’s always associated with a specific place and time. For example, ‘Orion & Dog’ was written during the summer, and ‘Winter’s Heir’ is about coming out of the long Montreal winter and experiencing a sense of rebirth.”

The album has a back story: “I met and fell in love with a girl in Montreal while on tour with Irving, and just before signing with Dangerbird,” Church recalls. “And then, while touring behind the Sea Wolf record, I spent most of my time off in Montreal with her. Apart from ‘Wicked Blood’ and ‘O Maria!,’ which I wrote in Los Angles, everything on White Water was written in Montreal, holed up in our little apartment, a block away from the river. That was all of last fall, winter and spring, so I was very much influenced by that experience, and a lot of the record is set there in my immediate surroundings, along with remembrances of being home on the West Coast.”

White Water, White Bloom was recorded at the Omaha studio of Mike Mogis (Bright Eyes, M. Ward, Monsters of Folk), with Church handling vocals, acoustic and electric guitars, as well as some of the air organ and pump organ sounds that were such a big part of the sonic signature of the earlier records. Joining him were the three core members of the six-piece Sea Wolf touring lineup: keyboardist Lisa Fendelander, bassist Ted Liscinski and drummer Joey Ficken. The remaining slots were filled by Mogis on lead guitar and an assortment of other instruments, with his Bright Eyes cohort Nate Walcott filling the role of the cellist, arranging strings for a quartet, sometimes working from cello parts originally created by Catherine Odell, who’d been part of the initial Sea Wolf touring lineup, with Church’s input.

They arrived with a full set of song demos, providing a detailed blueprint for their subsequent expansion into widescreen anthems that reshape the classic aspects of traditional folk, folk rock and chamber pop—but these bucolic elements are intercut with aggressive bursts of raw emotion sharpened to a serrated edge—making for a rich, vibrant sound that is virtually unprecedented.

Church is working in the most personal of mediums, and that results in constant self-questioning. “Every time you make a record,” he says, “you invariably think, ‘Oh, I wish I’d done this differently,’ or ‘Next time I want to do this.’ But if you get to the point where you don’t think that, then it’s time to quit. In terms of aspirations, as long as I’m constantly having new ideas and finding new places to explore with the music, I’ll be satisfied.”